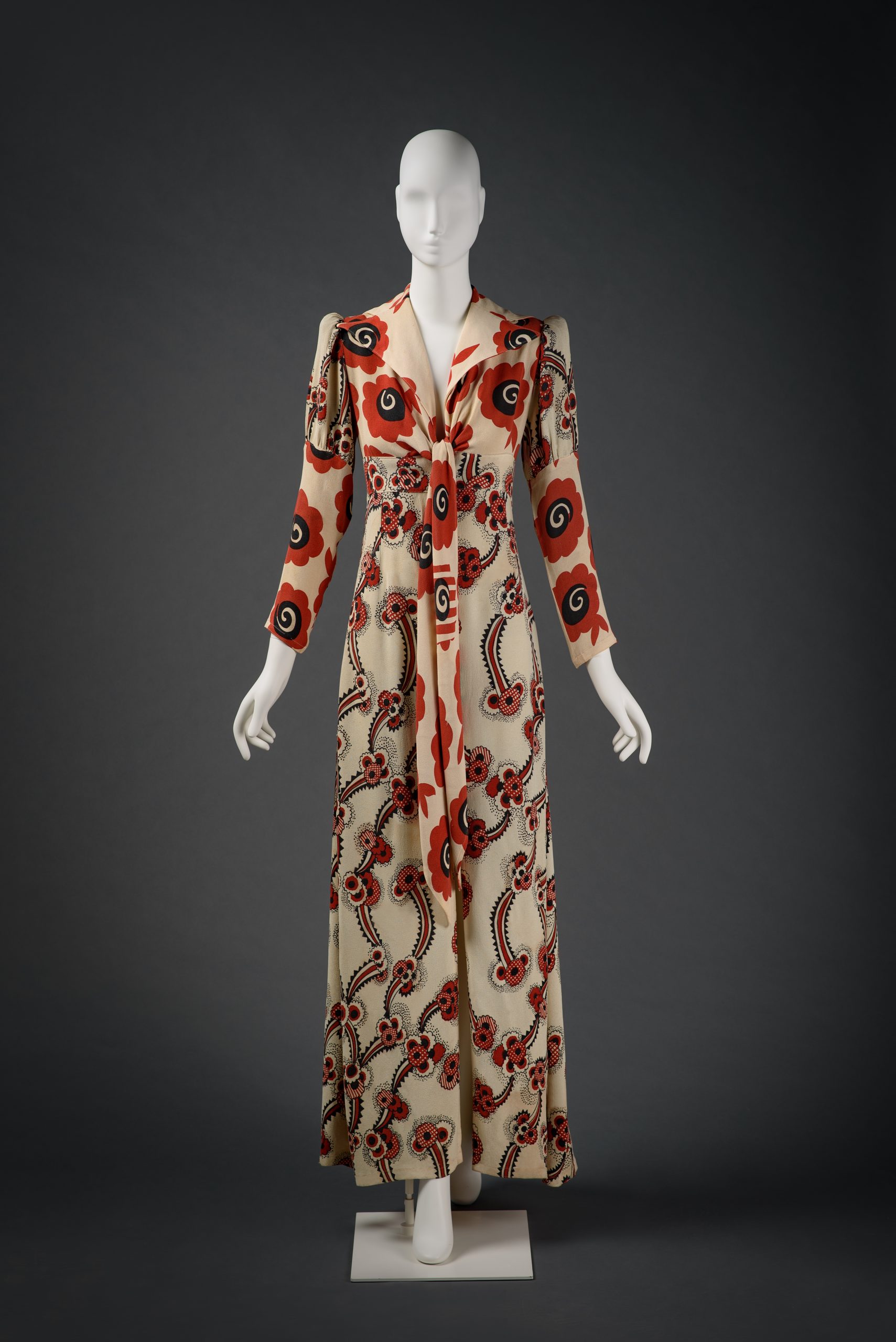 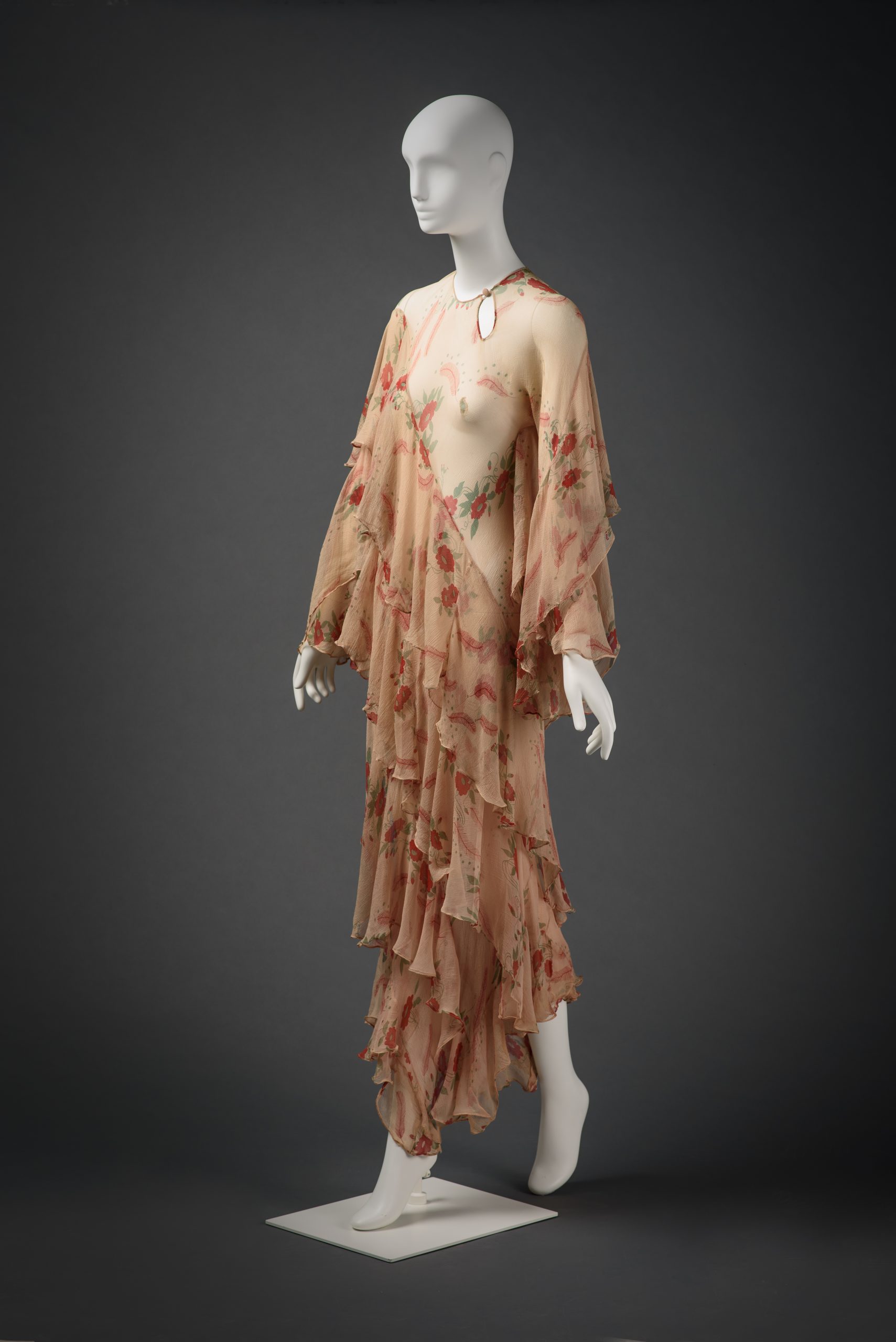 Stylized geometries, floral bouquets and patterns inspired by art (ranging from medieval tapestries to Ballets Russes to all the Cubist avant-garde and pointillism): the Ossie Clark defined the language of Swinging London with his long, colourful, fluid clothes.

With his unmistakable “flower power” style and one step ahead of new trends, Ossie was called the “King of Kings Road” thanks to his 1930s and 40s-inspired dresses with a slender cut that revealed the décolleté amidst sensual movements and plays on transparency. His short, but very intense, career left its mark in London in the period from 1965 to 1974,1 between Mary Quant’s miniskirt and the subversive punk movement of Malcolm MacLaren and Vivienne Westwood. Clark and his wife Celia Birtwell (Mr and Mrs Clark and Percy, from David Hockney’s famous painting at Tate Britain, 1970-71) came to define the bohemian neighbourhood of West London that was home to the new generation of brilliant and revolutionary youth.

Celia drew prints on light crêpes, silks and chiffons, and Ossie transformed them into clothes that immediately conquered the international jet-set and the pop scene. From Brigitte Bardot to Liz Taylor or Verushka, everyone was fascinated by their fashion. Mick Jagger, Brian Jones, Keith Richards, Jimi Hendrix, Marianne Faithfull, Anita Pallenberg, Eric Clapton, George Harrison, Bianca Jagger, Marisa Berenson: these are just some of the people that Ossie Clark dressed. When Hockney painted Ossie and Celia in their Notting Hill home, he depicted a snapshot of modern life, a perfect representation of the world of Clark and Birtwell, whose projects embodied a new, courageous way of life. Ossie was also the first designer to reconsider the idea of “occasion”: for him, evening dresses could be worn during the day and vice versa, while he invented the nude look with his transparent chiffon.Starting from a first important nucleus of clothes from the collection and archive of Massimo Cantini Parrini, the Museo del Tessuto di Prato and the Sozzani Foundation have dedicated a vast retrospective to the couple which will open in September 2022, recounting the incredible creativity of these two personalities who are often neglected in the history of fashion. Rare pieces from the private collections of Celia Birtwell from London and Lauren Lepire from Los Angeles complete the museum’s exhibition.

Under the patronage of the National Chamber of Italian Fashion, the exhibition will open Sept. 16 at the Museo del Tessuto in Prato and arrive in January in Milan at the Fondazione Sozzani. The itinerary not only features a series of dresses with Ossie and Celia’s iconic prints, but aims to tell the story of the designer’s context and evolution, from the Quorum boutique in Chelsea, frequented by the youth of the London scene to performances, through a series of videos, period photos and editorials, memorabilia, sketches and reproductions of the designs, to an exclusive video interview with Celia Birtwell herself.